Housie, also known as Tambola, is a lottery-style board skill game which originated in Southern Italy. A variation of the game is a popular form of raffle in the UK and elsewhere.

In Italy, a tombola is a traditional board game, first played in the city of Naples in the eighteenth century. It is similar to the game of bingo. It is mostly played at Christmas time, and prizes are often only symbolic.

In the United Kingdom, a tambola is a form of raffle in which prizes are pre-assigned to winning tickets.

Typically numbered raffle tickets are used, with prizes allocated to all those ending in a particular digit (traditionally a five or a zero). Players pay for a ticket, which they then draw at random from a hat or hallow empty box, and can instantly see whether or not they have won a prize.

Housie are popular at events such as village fates and coffee mornings, when it is expected that not all the players will be present at the end of the event. In some other languages such as French, Bulgarian, Slovak or Czech, "Tombola" is a general word meaning raffle. 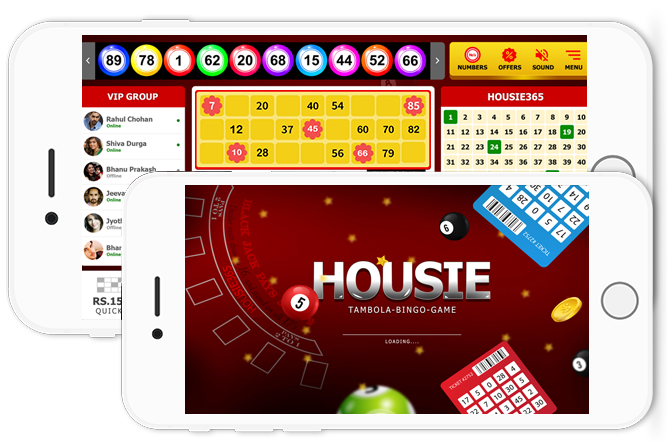 Housie: housie is a number based skill game. Housie also known as Tombola, Bingo is a popular game that is believed to be originated in Italy in early 1500s. The game is fun to play and easy to learn. All of us have played Housie at social gatherings, Festival Celebrations, office get-togethers, Marriage and Birthday Parties, kitty parties and society events.

Housie365 is a online game, that allows users to play (Housie or Bingo or Tambola) Housie365 game started in June 2020. Housie365 was Founded by Ch.Chittibabu, Co-Founder T.Srinivas they introduced for online game fans.

Housie365 also skill game, there is no one cannot bet on the game played by other person.

What is the housie game and how to play?

Look at your Housie ticket. In the first column you will see numbers from 1 to 9, in the second the numbers 10 to 19 appear, the third contains 20 to 29. This pattern continues until the final column (the eighth) which contains the numbers 80 to 90. and Listen to the caller